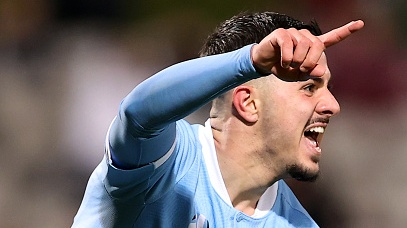 Tilio first joined Melbourne City last season.  The 20-year-old attacker joined the Melbourne club from Sydney FC with whom he had made his A-League Men’s debut in 2020 making three appearances for the Sky Blues.

Tilio had previously played for Sydney in the A-League Youth and the National Premier League NSW after having progressed through their youth academy.

Last season was Tilio’s first complete season of involvement in the top flight.  He made 22 appearances for City, starting 10 times and finding the back of the net twice.  Due to his versatility, he started across a number of positions up front.  The youngster is primarily a winger though.

Tilio will now continue with the Premiership and Championship winning club for a number of seasons. His two-year contract extension ensures he remains with City until the end of the 2023-24 season.

“The Club has shown a lot of faith in me so it was really a no brainer to extend my contract,” said Tilio upon the announcement of his signing.

“I want to help the Club continue to have success and create more memories in my time here so I can repay the faith that they have put it me.

“My goal this year is to continue to develop as a player and person to take my game to a new level.

“I want to push my teammates and push myself to play each week and show what I’m capable of by growing in confidence and bringing more to the team than I have before.”

“We all saw the enormous progress that Marco made during the course of the last A-League Men season, and to see him work so hard and get rewarded with a start in the Grand Final is testament to the type of person that he is.

“The improvement in Marco since he arrived in Melbourne has been incredible but he knows he still has more to do and to show his commitment in extending his contract with us means he can continue his journey to be being the best player he can be.”

After last season’s conclusion Tilio was joined the Olyroos for their 2020 Tokyo Olympic campaign, playing in three matches.

Football Australia have announced their 21 man Olyroos squad for their two-legged AFC U23 Asian Cup qualifiers against Indonesia. The winners will progress to Uzbekistan 2022.

A-League’s Western United on the move again: ‘Our club has grown enormously’

Western United will be making a training ground A-League Men’s move after having signed an agreement with Essendon Football Club.

Melbourne City will play South Melbourne FC on Friday, November 12, 2021 in the FFA Cup.  The club’s first six rounds of the upcoming A-League season can be found using this link.