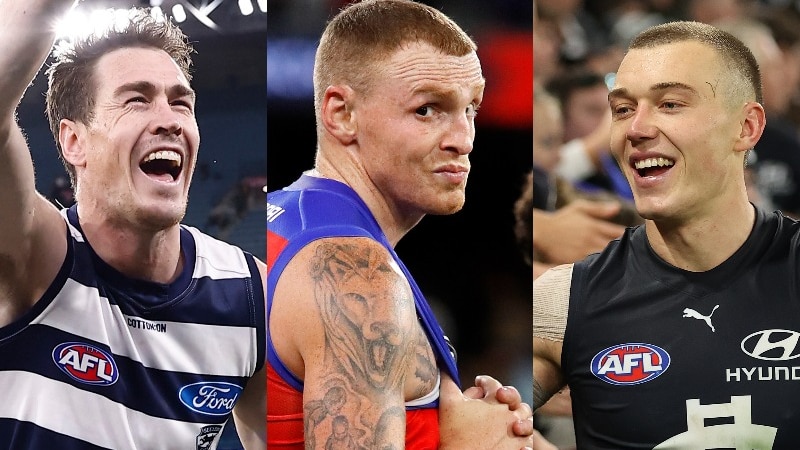 It was billed as the biggest singular round in recent memory, an extravaganza of significant games between the league’s very best.

There was much to be learned. Welcome to the Round-Up, where we digest the week that was.

The best way to make sense of the round is to identify the teams whose 2022 claims were improved and those whose were diminished — and that line can’t be identified by a pure win-loss split.

Melbourne emerged arguably the biggest winners of the round, refreshed and refocused after a trio of pre-bye losses.

The Demons looked back to their old selves against Brisbane.(Getty Images: Darrian Traynor)

The Demons, who ran roughshod over Brisbane on Thursday night, bore a striking resemblance to the ones who proved untouchable throughout the 2021 finals. There was a physical edge back to Melbourne’s play, which manifested in a domination of the contested ball but also in the pressure that surrounded every Lions possession.

Any sort of win would have been a boost for the Dees after their last month, but this was a reaffirmation of everything that has made them great.

Geelong were the other major risers, now up to second on the ladder after their stirring win over Richmond.

This win could be the catalyst for bigger things for Geelong.(Getty Images: Darrian Traynor)

The most promising part of that win for the Cats was the need to be multifaceted. They established an early lead playing with the control they are famous for, lost it when the heat of the game rendered it redundant, and won it again with their own brand of daring and aggressive play.

That last step has too often been lacking for the Cats in recent years, particularly in big games against the Tigers. It was a genuine coin-flip of a game, but Geelong have a blueprint now of what will be required come finals this year.

On that note, you also have to consider Richmond one of the winners of the round. Sure, they lost the game and have actually slipped out of the eight, but for three quarters they played their footy of the season and overwhelmed the Cats.

There isn’t a team in the league that would fancy a meeting with Richmond come finals time. The loss harms their chances mathematically, but the performance should raise expectations internally.

Finally, a mention for Carlton who, according to coach Michael Voss at least, just recorded their best win of the year.

Much has been rightfully made of their defensive absences, but the Blues kept Freo to just seven goals, largely through domination of territory and clearance. The Blues have a tough run in to September, but should be dreaming of more than merely ending their finals drought.

It felt like the Lions were teetering on the edge a little in the weeks before the bye. The Demons gave them a swift and decisive shove off it on Thursday.

Although Brisbane had managed to keep scraping results, performances had been slipping. Chris Fagan said the loss to Melbourne reminded him of the Lions of his first few years in charge, when wins were rare and thumpings depressingly common.

No doubt there was an element of post-bye rust involved, but the red carpet was out for Brisbane to fully arrive and make a statement, to prove they had taken a step forward and were worthy of the top position on the ladder.

They failed, and in a manner that will take some time to recover from.

Fremantle’s defeat will be far less scarring, but still poses questions, albeit familiar ones.

The Dockers’ fate in 2022 will be largely decided by their ability to score, and against a seemingly frail Blues backline they came up well short again.

Freo have proven time and again this year they’re capable of better, so it’s hardly panic stations. But this game did offer a glimpse of what it looks like when things aren’t quite clicking in the middle or up forward, and it didn’t look great.

When the Swans are hot, not too many teams are hotter.(Getty Images: Cameron Spencer)

And then there’s St Kilda, who couldn’t have looked less like a finals-worthy team in their last two games.

With Carlton, Fremantle and the Western Bulldogs coming up, this slump may well prove terminal.

The Power-Suns game legitimately rivalled Cats-Tigers for match of the round and given the implications for the losing team, felt more like a final than any other game. The Suns were so good, but the task from here is mighty tough now. Somehow, Port Adelaide are still alive.

Port Adelaide are hanging on for dear life, and are still in the finals hunt.(Getty Images: Sarah Reed)

Sydney remain right on the cusp of the top four with a relatively favourable run-in, while also being only one win and percentage away from 10th. It’s impossible to call which way they’ll go at this point, such has been their inconsistency this year.

That was a powerful win from the Bulldogs, made more impressive by the significant head start they gave Hawthorn. History suggests the bottom half of the eight fits them very comfortably indeed.

Bizarre last quarter aside, that was another impressive showing from Collingwood against the Giants. They’ve got a testing trip to the Gold Coast next week, but are more than worthy of their current spot in the eight.

The Pies are on the charge, and the finals are a realistic possibility.(Getty Images: Daniel Pockett)

West Coast would have circled this home game against Essendon as their best chance of another win this year, and so it proved. The Eagles’ forward finally looked something like its best version, and proved the difference against the Bombers’ shambolic defence.

Speaking of shambolic, the end of the season can’t come quickly enough for North Melbourne. Penny for Glenn Archer’s thoughts as he watched his young man debut in yet another heavy loss, this time to Adelaide.

Here we take stock of who is leading the race for the season’s individual awards.

The fight for the Rising Star has never been tougher to call. Quieter weeks for Jai Newcombe and Nick Daicos opened the door for players like Sam De Koning, who didn’t have his very best game for the Cats but stood up to be counted under immense pressure.

But the big riser was Nic Martin, who has retaken the lead thanks to a strong two-goal showing against West Coast. It’s a week-by-week proposition though, and still very much anyone’s award.

Mark of the week belongs to Darcy Fogarty, who would have had a claim for mark of the year had he grabbed this on the first attempt. But he didn’t, so Cam Zurhaar remains in front for MOTY honours.

And we’re going with Toby Bedford for the goal of the week. His teammate Ed Langdon still boasts the best goal of the season so far.