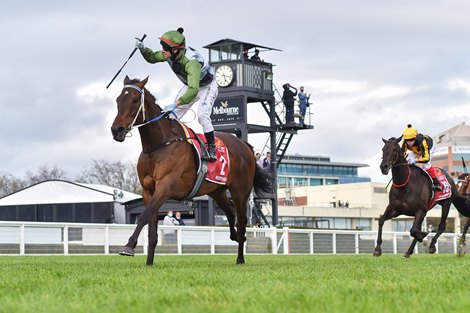 Incentivise was handed a 1.5 kilogram penalty for the Lexus Melbourne Cup (G1) next month after an impressive win in the Oct. 16 Carlton Draught Caulfield Cup (G1) at Caulfield Racecourse.

He joins Spanish Mission , Verry Elleegant, and Gold Trip , who are set to carry 57 kilograms (125.6 pounds) at Flemington, with last year’s winner Twilight Payment  given top weight of 58 kilograms (127.8 pounds) for Joseph O’Brien.

Incentivise, who didn’t make his debut at the races until his 4-year-old year, has strung together a stellar 5-year-old campaign, landing the Tattersall’s Cup (G3), PFD Food Services Makybe Diva Stakes (G1), and Tab Turnbull Stakes (G1) in succession before his tour de force at Caulfield. In the Caufield Cup, the Steve Tregea, Brae Sokolski, and Ozzie Kheir runner broke widest of all from the barrier and still drew away to a 3 1/2 length score over Nonconformist .

Incentivise will make the step up to two miles for the first time Nov. 2 at Flemington, when he bids to become the first horse to carry more than 57 kilograms to success since Makybe Diva’s third win in 2005.

Greg Carpenter, Racing Victoria’s executive general manager of racing, said: “Incentivise was imperious in winning the Caulfield Cup on Saturday and, along with Jameka in 2016, was arguably the most impressive Cup winner since Might And Power won by seven and a half lengths and broke the track record in 1997.

“A 1.5 kilogram penalty and Incentivise’s new weight of 57 kilograms represents a significant challenge for the newest star of Australian racing to deliver trainer Peter Moody his first Melbourne Cup, but it’s one that is not insurmountable given his current form.”

No horse has completed the Caulfield-Melbourne Cup double since Ethereal in 2001.

Moody is keen to see the upside to the penalty after he reported his star runner to have bounced back from his run at the weekend.

“I suppose it’s fair,” Moody told racing.com. “I would have preferred nothing at all, but I don’t think we’ll be throwing the toys out of the cot. We’re still a kilo from last year’s winner Twilight Payment, so I don’t think you can complain.

“Greg (Carpenter) gets it right more often than not and we’ll just take it on the chin and let’s hope he’s right again with this horse.”