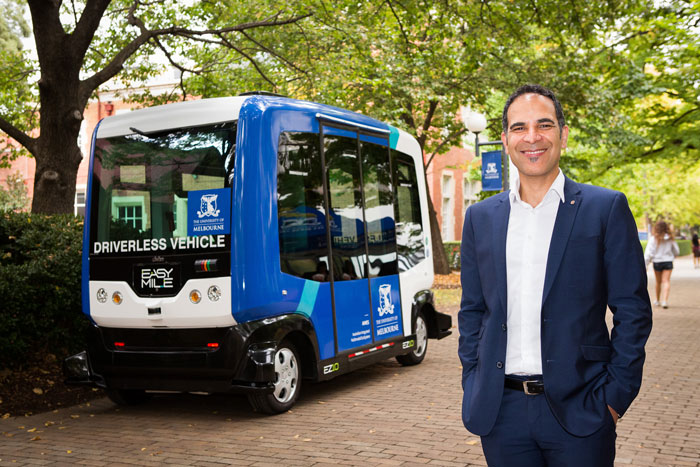 Majid Sarvi, Professor Of Transport Engineering and Infrastructure Engineering at the University of Melbourne, reveals more about the Australian Integrated Multimodal EcoSystem (AIMES), the world’s smartest ‘Mobility Hub’, used in the city of Melbourne and developed together with Kapsch TrafficCom.

You have set up the AIMES project, a “living laboratory” in Melbourne, to develop the transport system of the future. What is it all about?

Professor Sarvi: Just like our phones got smarter through connectivity, we can now use connected transport technologies to make traffic in our cities safer, cleaner and more sustainable. To this goal, we implement emerging connected transport technologies in a segment spreading six square kilometres in inner city Melbourne. It’s the world’s first and largest connected urban testing ecosystem.

What are the big challenges?

We use real technologies in the real world at large scale and in a complex urban environment. There are more than 100 km of road network and more than 70 intersections as well as trams, buses, very heavy truck movement, cycling and walking. All these parts of the transport system can be connected and “talk” to each other – from vulnerable road users like pedestrians, cyclists and drivers using Bluetooth, to sensors placed on buses, trams and trains, to environmental sensors recording pollution and noise. If the technology works here it is a real proof of concept.

How much money was invested?

So congestion is very expensive – how should it be tackled?

Traffic congestion is getting to a level where we cannot afford it anymore. Looking to the future, we should use artificial intelligence to help our cities with congestion and its impact. We are working toward that goal: In order to analyse data we are using machine learning techniques that dig out information from a huge amount of data. The most promising way to tackle congestion is to use these technologies which are comparatively low-cost.

You decided to involve technology partners – what did they do?

Within an urban multimodal ecosystem you need technology partners providing solutions to both operators and everyday citizens that use the network. In Melbourne, the team at Kapsch TrafficCom Australia developed a ‘Mobility Hub’ to connect, inform and guide travellers. This technological know-how enables the City of Melbourne to test our new mobility strategies in a real-world environment – with a special focus on improving safety standards and the latest congestion-reducing technologies to reduce time spent in stopped traffic.

This addresses vulnerable road users – how can their safety be increased?

More and more people use their bike, e-scooters or walk in the city – that makes them more vulnerable. According to recent findings, the amount of small trucks all around the world is skyrocketing – creating new challenges. Innovative technology like the AIMES project can and should be used to reduce the number of people dying or being injured on the roads. The Kapsch ‘Mobility Hub’ within AIMES targets such safety issues by deploying smart intersections and managing complex traffic within larger corridors. Together with our technology partners, we are trying to proactively predicting safety and traffic conditions in order to reduce congestion. We have learned that there are ‘win-win’ cases for all, citizens and transport providers alike – improving safety and reducing congestion and emissions at the same time. This is a great outcome for Melbourne and a model blueprint for the mobility management of other cities around the world!