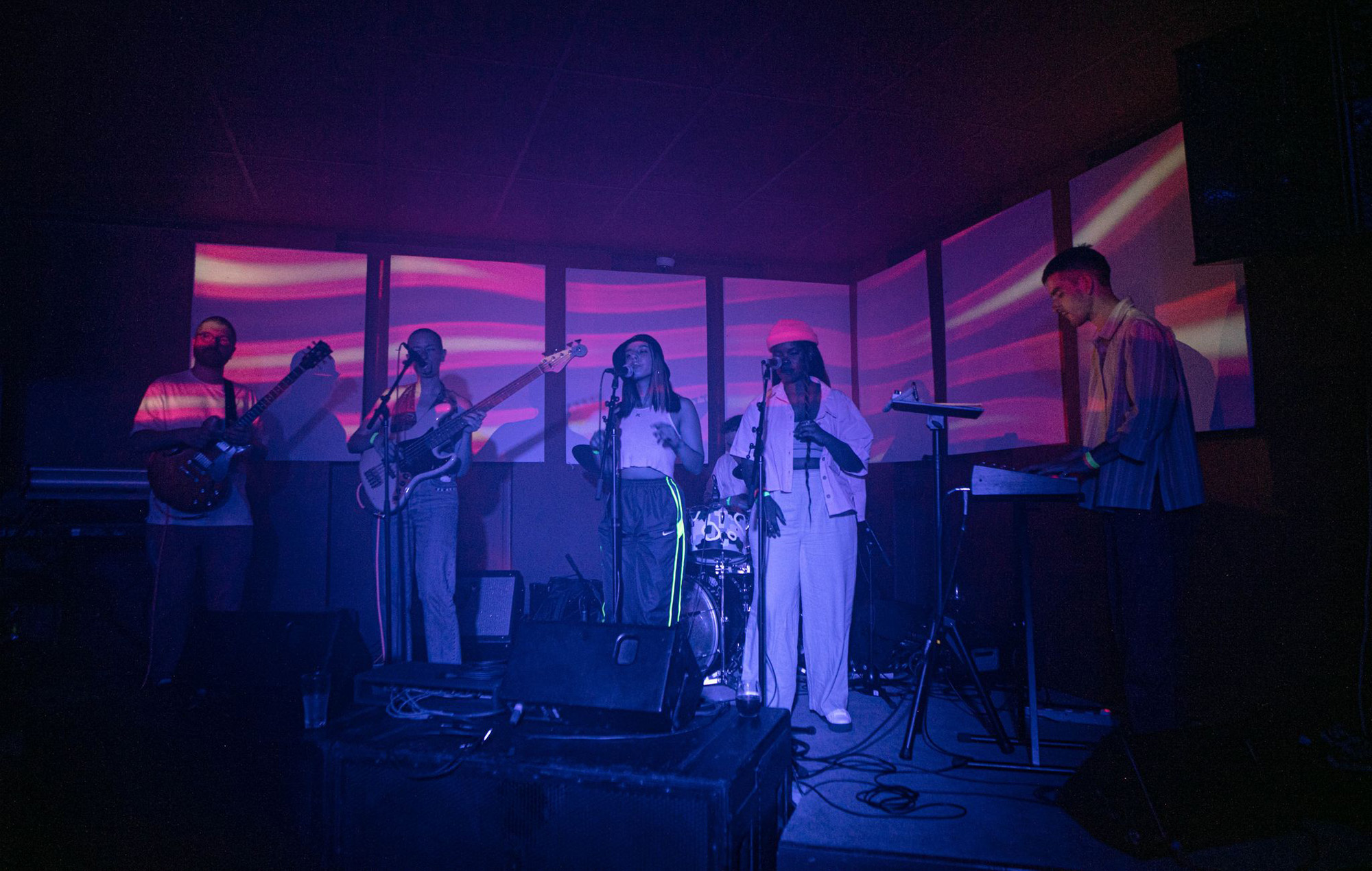 A lot can change in four years. In 2018, Melbourne was declared a live music capital of the world, after a 2017 census found that the Australian city had more live music venues per capita than any other city in the world – those venues drawing an audience of 112,000 each Saturday night.

In 2022, Melbourne’s live music industry is staggering back to its feet. The industry, which generated AUD$1.42billion in revenue in 2017, has spent months shuttered as the city underwent harsh rolling COVID-19 lockdowns that were among the longest in the world.

Visiting Melbourne as winter creeps into the city, just about five months after the last lockdown in January following an Omicron spike, NME finds there’s no lack of live music in the city. That’s not only thanks to the new annual arts and culture festival Rising that, after one postponement and one cancellation, finally took over the city. Venues large and small, in the heart of the city and in its suburbs, are programming their own eclectic events, collectively contributing to an embarrassment of musical riches.

But things aren’t like how they used to be. The landscape has changed, and promoters are still getting the lay of the land – now dramatically terraformed. “Having worked in live music and venues for close to 15 years, you get used to patterns. Audiences can be quite predictable,” Sally Mather, the Programming & Commercial Manager at the Forum Melbourne, tells NME. “But coming out of COVID, it’s so much harder to predict. It’s so varied.”

Liam Alexander, who runs the club Colour in Carlton with Benny Rausa, says: “Benny and I collectively have about 20 years of booking experience. Shows that I would have said, six months ago, would definitely sell out, they’re not pushing as much as they normally would, with no real reasons as to why… There’s not that much rhyme or reason to it, which is kind of confusing.”

Alexander was part of the core group behind Save Our Scene, a movement launched in 2020 by independent live music venues, of small to medium capacities, in the state of Victoria to lobby its government for support. Over 2020 and 2021, the organisation diligently advocated for gig venues and monitored various government support schemes – which included the first government-backed event insurance scheme in Australia, which the Victorian government launched last November alongside a $20million Live Music Restart package.

And after pandemic restrictions were lifted, Melburnians, ecstatic to be out and about again and even gladder to be able to dance at shows, turned out in force for live music.

“People’s initial reactions were sort of: ‘Oh god, we nearly lost this thing. Let’s not under-appreciate it’,” Alexander remembers. “But there’s been myriad other things that have negated that positive mentality… As financial restrictions tighten on punters as much as anybody, there’s a re-prioritisation of [personal] spending, which we’re starting to feel the impacts of now.”

Injections of government funding have helped bring live music back to Melbourne and Victoria, but “we’re still yet to see how it plays out in the real marketplace”, says Simone Schinkel, the CEO of Music Victoria, an independent non-profit that represents contemporary music in the state. Consumer confidence is one of the biggest problems that are front of mind for venues in the state right now, she adds. And when the Forum – which has historically seen 95 per cent show attendance rates – was exiting Melbourne’s last lockdown in January, it had 30 per cent attendance on a few shows, Mather reveals. “It was crazy.”

“Audiences can be quite predictable… But coming out of COVID, it’s so much harder to predict. It’s so varied”

The Forum has been tracking attendance rates, “and the trend is steadily tracking upwards now, which is awesome,” she adds. Bumper periods like the two weeks of Rising and the recently concluded spate of Splendour In The Grass festival sideshows are also reasons to keep smiling, too. “Looking towards the end of the year, we’ve got [a] period of 40 or 50 days with no days off.”

November and December, especially, look to be bustling for Victoria in general thanks to the expansion of Always Live, the state’s big live music extravaganza. The programme has already brought the Foo Fighters to Geelong, and will soon follow up with over a hundred more events, including big-ticket shows like Nick Cave and Warren Ellis at Hanging Rock and Billy Joel at the Melbourne Cricket Ground, plus smaller gigs at pubs and on rooftops.

The calendars quickly filling up may overshadow the quieter, less remarked-upon losses that Melbourne has sustained. “We’ve been buoyed this year by the easing of restrictions and a return to normal, I suppose,” says Alexander. “But we’ve lost so many senior programmers, bookers – people who were the most respected in the city. The reason that this city is recognised in the way you articulated at the beginning of this phone call are gone, and they’re not coming back.”

Both Alexander and Mather note that the pandemic has been hard on young artists and bands who’ve had precious momentum interrupted. “[The industry has] lost of a lot of trajectories for emerging acts,” Mather says. “They’ve had two years of not being able to build audiences.” Those developing acts are the ones who are essential to the trading of small and mid-sized venues like Alexander and Rausa’s Colour Club, which has a 170-capacity bandroom, and the 250-capacity John Curtin Hotel. “It’s already quite a stressful line of work, being a musician,” says the Curtin’s booker Paris Martine. “When you actually had some momentum, seeing that fall away can be really difficult.”

And even if COVID-19 is no longer the existential threat to live music venues the way it was two years ago, venues have plenty of other perils to worry about. “We are already in a pretty hard industry. We already have the odds stacked against up quite significantly,” says Colour Club’s Rausa. “We might have survived COVID, but then we won’t have the resources to fight all these other ever-present battles… What flow-on effects have impacted venues and made it financially unviable or undesirable to continue to work in this industry?”

“We might have survived COVID, but then we won’t have the resources to fight all these other ever-present battles”

For one, there are the sharply rising and prohibitive costs of public liability insurance, which venues from South Australia to Victoria are grappling with: “It’s just gone through the roof,” says Music Victoria CEO Schinkel. And there is the ravenous real estate market and the threat of redevelopment – as the operators of the John Curtin Hotel know only too well.

In February, the Curtin’s operators revealed that the building’s owners had decided to sell, “making way, most likely, for apartments”. It was later reported that the building was sold for $5.5million to an offshore developer (though the real estate agent involved, CBRE, has declined to confirm details to the media).

The news that an end was on the horizon for one of the city’s oldest pubs, a beloved music venue and valued meeting place for labour movement members and union figures sent shock and dismay through the city. The Curtin’s community rallied around it swiftly. Before its sale, it had already been granted interim “significant” heritage listing by the City of Melbourne, meaning any proposed redevelopment of the building must take into account its heritage value. And last week, the Curtin was recommended for inclusion on the Victorian heritage register, which will grant the property a degree of legal protection if it ultimately makes the list.

Another milestone in the protection of the Curtin came earlier in May, when the Building Industry Group announced a ‘green ban’, unanimously agreed upon by the group’s unions, which would prohibit construction workers in Victoria from working on the venue’s redevelopment.

The announcement of the green ban, Martine says, while heartening, led some to assume that the Curtin, its live music operation and the team behind that had been ‘saved’. As she works to fill the Curtin’s gig calendar with shows, both by artists who’ve been central to its history as well as those who have never played the storied venue, she still isn’t booking any shows past November 30 – the date the current managers’ lease ends.

The band RVG playing the John Curtin Hotel. Credit: The Music Is Talking

“A green ban doesn’t increase the length of the lease,” she tells NME. “We are still gone in November. Obviously we would love to be able to speak to whoever has purchased the building to be able to continue to present live music and to be able to protect the jobs of the staff, but they have not presented themselves.”

To Martine’s knowledge, attempts by various parties, from Music Victoria to the unions, to contact the Curtin’s new offshore owner have so far been unsuccessful. The protracted property settlement – which Martine says she’s been told will not go through until October, one month before their lease officially ends – has also been cause for worry. “We are all living in limbo,” she says, “in the hope that whoever has purchased the building will present themselves as soon as possible and work with us to protect what we have spent years cultivating here.”

It’s difficult to square the Curtin’s plight with the vaunted title ‘live music capital of the world’ – a title Melbourne earned on numbers, when the Live Music Census of 2017 found the city had more live music venues per capita than any other in the world. The next census, which started work in 2021, has so far covered regional Victoria and expects to complete the metropolitan part of its survey by the end of the year.

This census will show both the vibrancy of the state’s live music industry – and the blows it has taken during the pandemic. Sharing some preliminary figures from the 2021 census with NME, Schinkel reveals that in 2019 live music activity in regional Victoria alone generated $530million – but then between 2020 and 2021, with 74 per cent of events postponed or cancelled, there was a 76 per cent drop in how much live music attendees spent on concert tickets, drinks, accommodation and more.

“It was just decimated,” she says. “So we’ve got quite a bit of work to get back to where we were, but I reckon we can do it.” That sense of optimism – and trepidation – is shared by Sally Mather when she looks at what the rest of the year has in store for the Forum. “I think the rest of 2022 is going to be a really exciting time. We just have to make sure that we get to everything without getting too excited and burning out. It’s joy and anxiety, at the same time.”