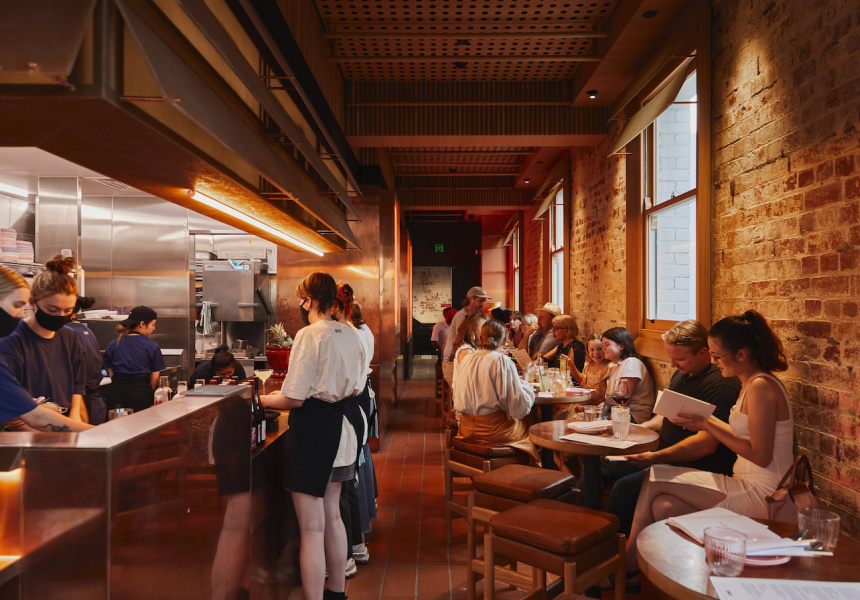 The restaurant openings we’ve been most struck by this year really run the gamut.

So far, some have broadened our horizons – whether on the intricacies of regional Indian cuisine or the potential for food “scraps” to be transfigured into something truly incredible. Others are dialling up the nostalgia, harking back to a different time with transportive fit-outs – be it all-out ’80s Italiana or old-world New York grandeur. And suburban gems are helping cement their neighbourhoods’ spot on the culinary map.

Here are eight of the very best – and a couple of honourable mentions.

After amassing a waitlist in the thousands – it burgeoned after she appeared as a guest judge on Masterchef in 2020 – chef Helly Raichura has given her pop-up dining concept Enter Via Laundry a permanent, dedicated home, tucked away in Carlton North. And while it’s now an enter-via-laneway situation, the 20-person diner has the same intimate dinner-party feel of the degustations she once hosted in her Box Hill home. The lighting is dim, the tables are communal and the experience is eye-opening. Raichura – who grew up in Gujarat, India – has moved away from dainty, degustation-style plates in favour of hearty regional Indian dishes. She’s currently serving beautifully thought out (and presented) 20-dish Bengali banquets made with native Australian produce. And you’re encouraged to eat with your hands.

Steak might be the star, but it’s just one of many standouts at Grill Americano, the bold, theatrical newcomer from prolific Melbourne restaurateur Chris Lucas – also behind Chin Chin, Society, Yakimono, Baby Pizza, Kong and Hawker Hall. On Flinders Lane, it’s his glamorous revival of the Italian steakhouse, with Venetian elegance, New York grandeur and Melbourne nostalgia. He calls it a “reimagining [of] the amazing grills and brasseries that we used to have here in Melbourne back in the ’60s and ’70s and early ’80s”. Slink into a plush banquette and feast on lavish scampi-for-two atop saffron pilaf and tricked-up tiramisu scooped tableside (dessert is unmissable here). Or perch at the curvaceous marble bar with a signature Americano and hunks of Parmigiano drizzled with chestnut honey.

Come for reimagined cacio e pepe, stay for the food “scrap” revolution at Parcs (“scraps” spelt backwards), an energetic new wine bar and restaurant from the Sunda and Aru team.
The 20-seat, fermentation-forward spot on Little Collins Street is helmed by boundary-pushing chef Dennis Yong, who is challenging how we think about food waste. He’s creating clever, considered dishes with produce other restaurants might toss aside – or overlook altogether. Seventy per cent of the menu is made up of scraps, ranging from cucumber peels to the outer leaves of cos lettuce to on-the-cusp mangoes. One essential is the “umami e pepe”, a play on cacio e pepe that flips the cheesy, peppery Italian pasta dish on its head, with a secret recipe centred around miso made from leftover bread.

Her has been a long time coming. But the four-pronged, choose-your-own-adventure mega-venue by HQ Group (which also owns Arbory Bar & Eatery and its riverside sibling Arbory Afloat) has finally taken over the CBD’s handsome heritage-listed Pacific House. There’s an oasis-like rooftop bar, a glowing, hard-to-find vinyl-listening room and a swish all-day bistro. But the pièce de resistance is the tiny, lively BKK on the third floor – one of Melbourne’s finest new Thai diners. Named for Bangkok’s airport code, the fiery, barbeque-driven menu traverses Thailand’s many regions, with dishes such as big-on-flavour raw-beef larb and spiced-up Chiang Mai sausage, both from the north. And because the open kitchen occupies about three-quarters of the space, it gives some 30 diners on high stools front-row seats to the show of flames billowing under woks.

This homey new southern-Chinese restaurant – which opened on the cusp of 2022 – is putting Aberfeldie on Melbourne’s culinary map. Following the closure of St Kilda Cantonese institution Lau’s Family Kitchen, chef Yip Wu and three of his kitchen team – Tang Au-Yueng, Xing You He and Qiang Wu – opened Benyue, a family restaurant of their own, in the north-west. Behind an unassuming brown-brick facade – with its ’80s-suburbia vibe and Spanish mission-style archways – it’s become an almost-always-booked-out destination diner. Lau’s inspired 70 per cent of the menu; favourites such as the lamb spring rolls, phenomenal steamed scallop siu mai and fluffy crab omelette are all on the roster. Plus, a raft of family-friendly Cantonese classics.

Commune Group’s stable of Melbourne restaurants includes Hanoi Hannah, Tokyo Tina, Firebird and New Quarter. But its latest, Moonhouse, is an alluring Chinese-inspired bistro in an old art deco bank (and former Red Rooster) in Balaclava. The heritage-listed building has long been a powerful presence on Carlisle Street, but its newest iteration is perhaps its most transformative – with elegant burgundy booths, art deco chandeliers and panes of red glass partially shielding the kitchen. Led by long-time Commune Group chef Shirley Summakwan, alongside group executive chef Anthony Choi, it’s doing old favourites in new ways. The snacky, sesame-crusted prawn toast comes with a prawn-bisque dipping sauce. The Hainanese chicken club is a riff on the beloved rice dish. And the aptly named Duck Ceremony is a half roast bird with plum salt, hoisin and pancakes.

Classically French-trained chef Scott Pickett has gone back to his roots at this sexy new 1920s Paris-inspired bistro on Smith Street in Collingwood. It’s located on a site the restaurateur knows very well (it once housed his restaurants Lupo and Saint Crispin, as well as the Broadsheet Kitchen), but it now bears little resemblance to its many former lives. The best seat in the house is on the cosy mezzanine overlooking the usually heaving dining room. And chef Daniel Southern, who ran the kitchen at Bar Margaux when it opened, has curated a menu of playful spins on French classics – such as vol-au-vent d’escargot (garlicky braised snails in puff pastry) and oeufs mayonnaise (a simple French dish of hard-boiled eggs and mayo that’s taken very seriously in its homeland) – here, it comes topped with caviar).

A vintage jukebox. Clusters of disco balls. And red vinyl everywhere. Russell Street’s new Italian disco diner could’ve been plucked straight from an old-school movie. And that’s exactly how owners Zara and Michael Madrusan (The Everleigh, Bar Margaux and Heartbreaker) intended it. Connie’s Italian Diner is an extension of the couple’s original hole-in-the-wall pizzeria, which remains inside their rollicking bar Heartbreaker at street level. Ascend the stairs for heaped pastas and grandma pies, “tirami-sundaes” (a soft-serve hybrid we didn’t know we needed) and cocktail pitchers. Or spill out onto the spacious rooftop terrace, which looks over Lonsdale Street and has a huge mural dedicated to the Italian amaro Cynar.

Two rebirths also deserve acknowledgement – and your attention – at this point in the year. One is the relocation of Shannon Martinez’s trailblazing plant-based diner Smith & Daughters to an old red-brick fire station in Collingwood; it’s part of her huge new vegan hub – which also includes the new Smith & Deli, where she’s making cafeterias cool again. The second is the return of beloved Chinatown institution Ling Nan – one of the most crushing Covid restaurant casualties; now, the Chinese diner lives on, on Lonsdale Street, with XO pippies and Chinese doughnuts aplenty.