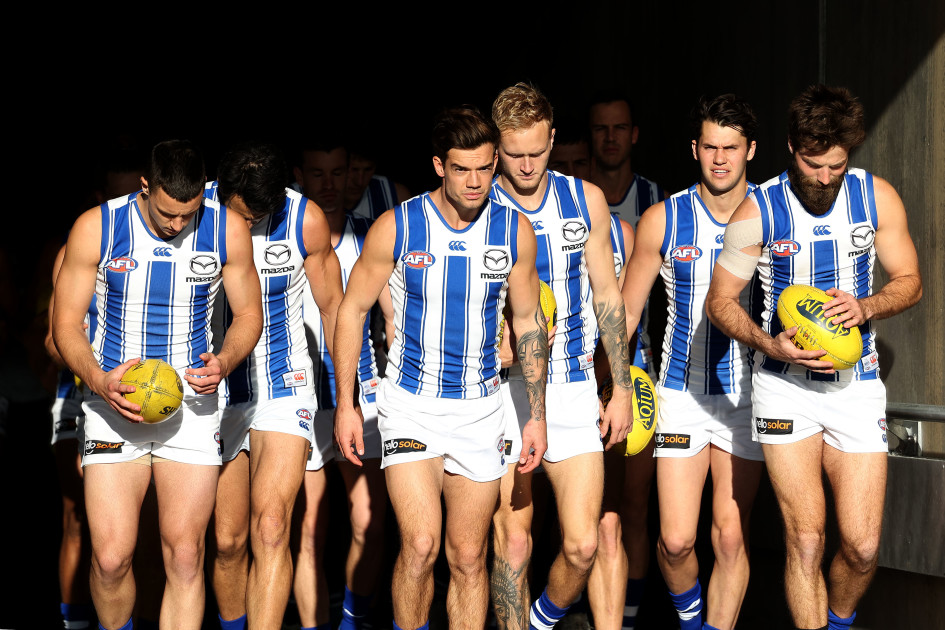 North Melbourne claimed the wooden spoon in season 2021, but there were some positive signs in David Noble’s first year as coach.

The Kangaroos won four games and drew one, but they did play an attractive brand of footy at times and found themselves in a lot of games before fading late.

The season could be seen as a foundation set for their rebuild which will continue in 2022.

Assessing what the Roos achieved this year, Sportsday’s Jimmy Bartel and Sam McClure used some various concepts to dissect where the club is at right now and what could lie ahead.

Inspired by the Netflix hit series Squid Game, former Geelong star Bartel played ‘Red Light, Green light’ for those who flourished and those who perhaps had the handbrake on.

“He emerged from being a young player at the Kangaroos to a quality player of the competition, with his ability to break the lines.

“He’s gone from a high half-forward to more of an inside mid who can get forward.”

Bartel’s red light was for a recruit who was restricted to just two matches in 2021.

“Aidan Corr. He never really got going,” he said.

“Key back, they got him from the Giants. He’ll fill in nicely. Greater responsibility with Robbie Tarrant going (to Richmond).

“Josh Walker was very serviceable for them down back. Took a lot of the big jobs and intercept marking.”

McClure had three big questions for Bartel regarding the Roos ahead of next season.

How will the forward line operate with new recruit Callum Coleman-Jones, Nick Larkey plus Charlie Comben and eventually Jacob Edwards?

“I think it will be Larkey plus one of those, because they’ve got Cam Zurhaar,” Bartel said.

“Then they’ve got to find a mid-forward type who can hit the scoreboard around Larkey and then a specialist small forward.

What is their best ruck setup?

“Todd Goldstein is still doing the bulk of it,” Bartel said.

“That’s how he plays his best footy, he grinds his way through it.

“I still think he does 70 percent, not the 95 that he used to do when he’d never come off the field. Then Coleman-Jones steps in.

“He (Goldstein) might play longer but just sit behind the ball. He can manage it, when he gets tired he parks himself forward, or sit 60-70 metres from goal when they lock it in their forward line.”

Will they regret not accepting a deal for pick 1?

“You’re better off going with what you know now and Jason Horne-Francis is clearly the number one pick. He absolutely brained the SANFL in his last game.”

Bartel also posed to McClure some ‘unders/overs’ for the Kangaroos in 2022.