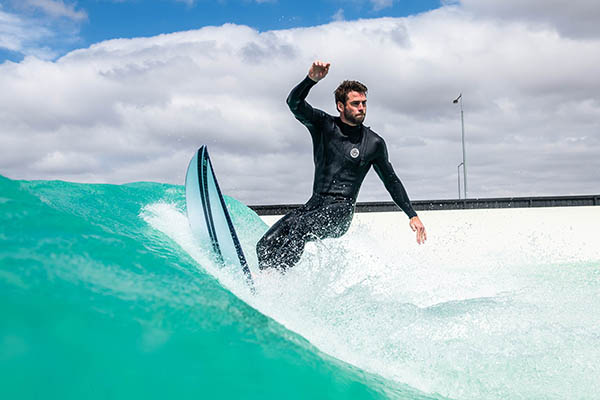 URBNSURF Melbourne – Australia’s first surf park – is set to reopen on Saturday, 23rd October 2021 following a tumultuous 18 months with more days closed as a business than open. URBNSURF will reopen once the 70% target of vaccinations is reached and all guests aged 16+ will need to provide proof of vaccination upon entry.

Reopening safely for all guests and crew will be their number one priority, ensuring they adhere to the directives of the Victorian Chief Health Officer and the Victorian Government.

Metropolitan Melbourne residents will be able to access the park, initially with a maximum of 50 guests on site at any time and up to 25 surfers in the two-hectare surfing lagoon per hour. That’s a wave to surfer ratio of more than 16 waves in an hour, which is set to test even the fittest of the surf park’s surfing community coming out of lockdown.

URBNSURF Melbourne Chief Executive, Damon Tudor notes “After a crazy couple of years, we’re beyond stoked to be opening our doors and pumping perfect waves again. All Melburnians deserve a much-needed reprieve from the extended lockdowns, working from home and home schooling with an escape in the waves to feel refreshed and rejuvenated.

“In the coming weeks in addition to surfing perfect waves, Melbournians will have more to look forward to as restrictions ease further. The Three Blue Ducks restaurant will offer seated service again, and private sessions, surf lessons and spectator passes will resume in early November. The new skate pad, day beds, heated cabanas and the playground area will also be available for everyone to enjoy.”

With numbers being tight, guests should book in advance to secure their preferred session and avoid disappointment.

URBNSURF Melbourne advise that “the summer of 2021/22 is set to be an absolute cracker. Roary the wave generator has been perfecting some new wave settings including Cruiser Turns while returning our regular menu of perfect ocean-like waves for beginners to advanced surfers alike.”

Only 14kms from Melbourne’s CBD, URBNSURF is the perfect break and the best spot to catch waves in a safe, accessible and all-inclusive surf environment.

Tudor added “with Sydney restrictions easing, works on URBNSURF Sydney at Homebush will start to really fire up and we are on track to open in the summer of 2022/23.”

Asking a small favour
We hope that you value the news that we publish so while you’re here can we ask for your support?

The news we publish at www.ausleisure.com.au is independent, credible (we hope) and free for you to access, with no pay walls and no annoying pop-up ads.

However, as an independent publisher, can we ask for you to support us by subscribing to the printed Australasian Leisure Management magazine – if you don’t already do so.